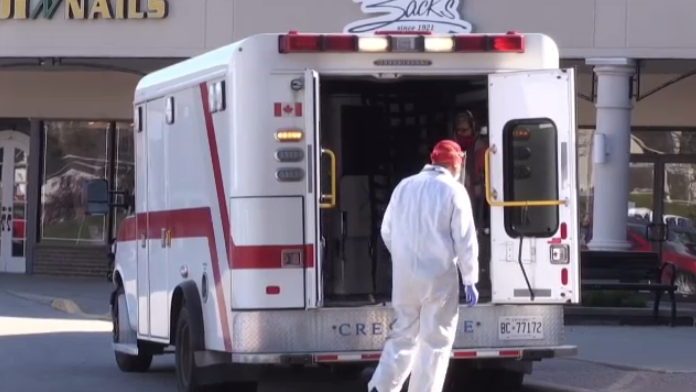 “KITCHENER — A COVID-19 assessment and testing centre in Waterloo is offering a free service to make it easier for residents with transportation issues to get tested.

An old ambulance has become a free ride for those like Lina Roult, who  was tested at the KW4 Community Assessment Centre on Thursday.

“I’m so happy that this service exists because I don’t have a car,” she says.

The owner of the clinic, Rex Mohamed, teamed up with an area doctor to create the assessment centre.

In order to help prevent the spread of the virus on public transit, they initially rented a private limo service for patients who needed tests but had no way to get there.

Then he decided to purchase vehicles more appropriate to the task.

“These are ex-ambulances. We’ve bought two of those and we are transporting patients at no cost,” Mohamed explains.

Nearly 60 people have been transported to and from the clinic so far.

Patients sit in the back of the ambulances and are provided masks.

The vehicles are sanitized between each patient, and drivers are required to wear personal protective equipment.

Mohamed’s wife had also stepped in as a driver up until Thursday.

“As a matter of fact, my wife is in the hospital right now. She was picked up by ambulance in the morning with chest pains and my daughter is showing some signs,” he says.

“But it’s not going to stop us. We’ll continue serving.”

“It was a big relief because otherwise I’d have to have thought about walking up here, which is quite a long ways,” she says.

“Or I would have had to have not had a test, which is not good.”

Last weekend, testing opened up to the general public—before then, it was prioritized for high-risk groups, like health-care workers or long-term care residents.

Certain locations are still by doctor referral only, while others, like ones at the hospitals in Kitchener, are working on self-referral options.”

*Booking is no longer available for COVID-19 testing.  Walk-ins are accepted at the Waterloo Clinic at 170 University Ave. W.

*Patients who require COVID-19 testing for travel purposes should be aware that there are no guaranteed turn-around times for test results.